Brrrrrrrr....March, I can't say I was sorry to see the back of it. When the Beast from the East came barrelling in, it wasn't just Rannoch that was affected, but the whole of the country. I spent the week answering text and Facebook messages from concerned relatives, asking how we were - very well as it happens, and in fact I think we were better off than those further South.

The fishing Season kicked off with a bit of a whimper, largely due to the weather. The first weekend normally see's a fair few groups of hardy fishermen, keen to get the first catch under their belt, but, with a few exceptions, they were thin on the ground. 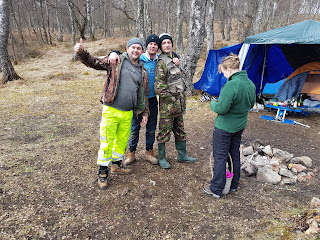 Although these lads didn't seem to be put off by the weather. Then again, judging by the amount of alcohol going downrange, not much fishing was taking place, but they were still happy to pay for permits, and of course, to a man, they told us that they always leave the place tidy - which to be fair they did.


The first Saturday of the Season, and I and another member of the committee, David, found ourselves at the Tryst in Pitlochry, attempting to spread the Rannoch Community inclusivity message and secure around £1500 of funding to help defray costs associated with providing camping and information leaflets to the general populace. The application process was a "first past the post", voting competition, the more votes you have, the better chance you have of securing the funding. 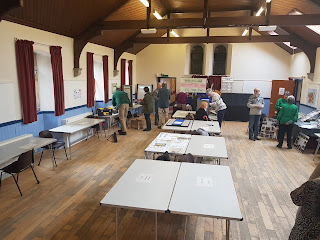 The catch, and of course there is always a catch, was that only people in the PH17/PH16 postcodes could vote for their favourite project. On arrival at the hall, we grabbed what we believed was a "good" spot, and set up our small stand, complete with a projector and slide show.

Although the hall was fairly quiet at the start, by 11am it was full to capacity, with around 24 organisations all vying for around £10,000 worth of community funding.


All of the prospective bidders were equally worthy of funding as the next, and the enthusiasm in the room was infectious. 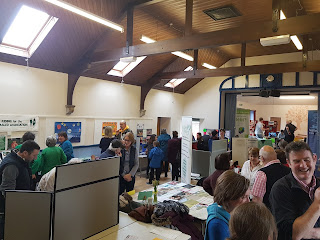 Both David and I were optimistic about our chances, and hadn't wasted any opportunity to convince some of the waivering voters that entered the room about the merits of our cause. However things changed when a large contingent from the Grandtully Community Group appeared in the hall, I think they had the vote sewn up. 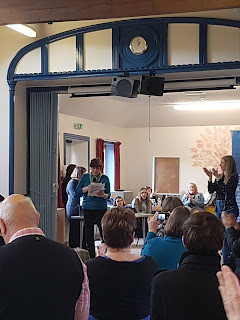 The vote closed at 1230pm, and the results were announced at 1pm. Sadly it wasn't our day, but it was fun awaiting the announcement. I think around 19 causes secured funding of anywhere between £250 and the maximum of £1500. PKC have said that they will work with the groups who didn't secure funding to find other ways to raise the much needed cash.

Moving on.... This appeared in the Scotsman, the house is a striking feature if you walk to MacGregor's Cave, and is now in a sad state of repair. The image below is a screen grab taken from a youtube video which you can view here: 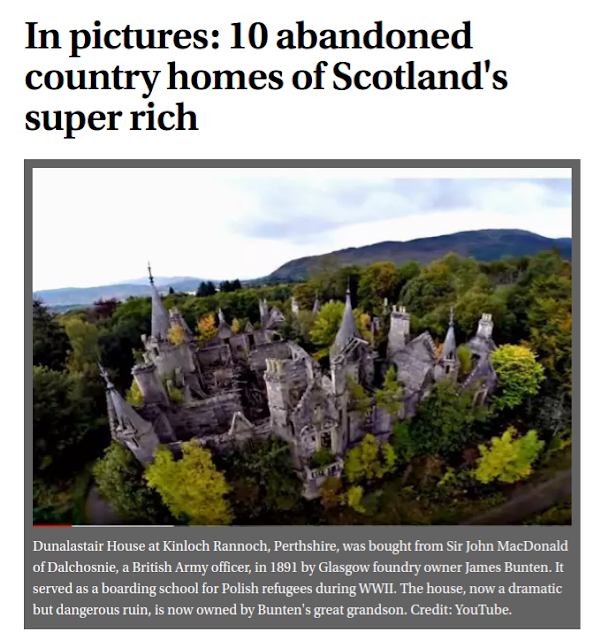 We're all hoping for signs of Spring, but every time we get our hopes up, the snow comes piling in and gives us a rude awakening. Still, it can't be long now - the very first lamb, is standing looking slightly bewildered at Finnart, and the "dafs" have started to appear over in Aberfeldy - won't be long now!

In which case I'll be looking out for Lapwings. 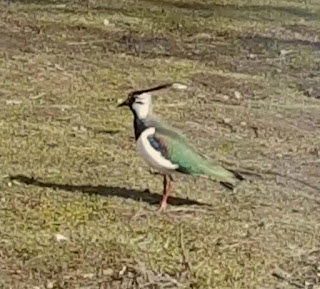 I spotted a field full of them at the roadside over on Strathtay this week, and caught a photograph of this one in Dalwhinnie at the end of March. These attractive birds are in the Plover Family Group, and are on the UK Red List, which means they are protected under the current Wildlife and Countryside Act 1981

You can find out more about this bird here:

Become a Friend of Rannoch
If you are interested in keeping in touch with our wonderful area, supporting the work that we do, or just want to show your support, you can do so by signing up to our "Friends of Rannoch" scheme. It only takes a moment, and won't cost you a penny. You can find out more here:

The most beautiful springs, are those that come after the most horrible winters! Mehmet Murat ildan April has seen a really slow start to, well everything. Spring has only just started to get going, and this has been reflected in the fishing season. Even when fishermen do appear, they complain bitterly that they aren't catching anything, hopefully the early May Bank holiday will ring the changes - we'll see. Often, when we transit the Lochside, we do meet some opposition to paying for a fishing permit. The most recent one involved a discussion with an individual who believed that because the LRCA do not stock the Loch, we cannot therefore charge for a permit - it helps to have the relevant Act and its sections on the tip of your tongue, (Scottish Freshwater Fisheries Act 2003, Section 48), but I'm starting to think we might want to opt for more drastic measures "You might want to rethink that refusal to buy a permit" If like me you mark the onse
Read more 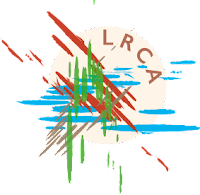